Endometriosis is a chronic disease

Endometriosis is a chronic disease, which is characterized bythe presence of fragments of endometrial-like tissue outside the uterus.

These fragments of tissue, called “endometriosis lesions”, of variable dimension (ranging from a tens of microns to several centimetres), have the potential to grow and spread through episodes governed by periods.

General information on the endometrium

The endometrium is the mucous membrane that lines the inner wall of the uterus.

Its monthly growth is intended to create the ideal conditions for receiving an embryo in the event of fertilization. . In the absence of fertilization, the endometrium is eliminated in the form of menstruation through the cervix and then the vagina, and the cycle naturally begins again the following month.

During menstruation, some of the blood flows backwards through the fallopian tubes and into the abdominal cavity, where it is broken down over the next few days.

The breakdown of the blood allows the release of iron contained in the hemoglobin, which induces a local inflammatory process.

Menstrual pain that is moderate and of short duration can be physiological, linked to the uterine contraction enabling the evacuation of the endometrium, but also linked to pelvic inflammatory phenomena from the breakdown of blood in the abdominal cavity.

The origin of endometriosis

The origin of endometriosis lesions is partially known, and several theories have attempted to explain it. These theories are most likely complementary, and considerable scientific research is underway to try to more clearly account for the origin of the disease (Lagano AS, Martin DC et al, Int J Molec Science 2019).

Others are probably the result of a transformation of normal cells (metaplasia) into endometriosis cells. This theory may explain the appearance of endometriosis cysts in the ovaries, as well as lesions that appear in the pelvis.

Finally, a recent theory emphasizes the epigenetic transformations that occur in normal endometrial cells, which would be at the source of the appearance of intra abdominal endometriosis lesions.

All these theories explain how endometriosis lesions appear in certain patients, but no one theory seems able to explain the phenomenon in a global manner. 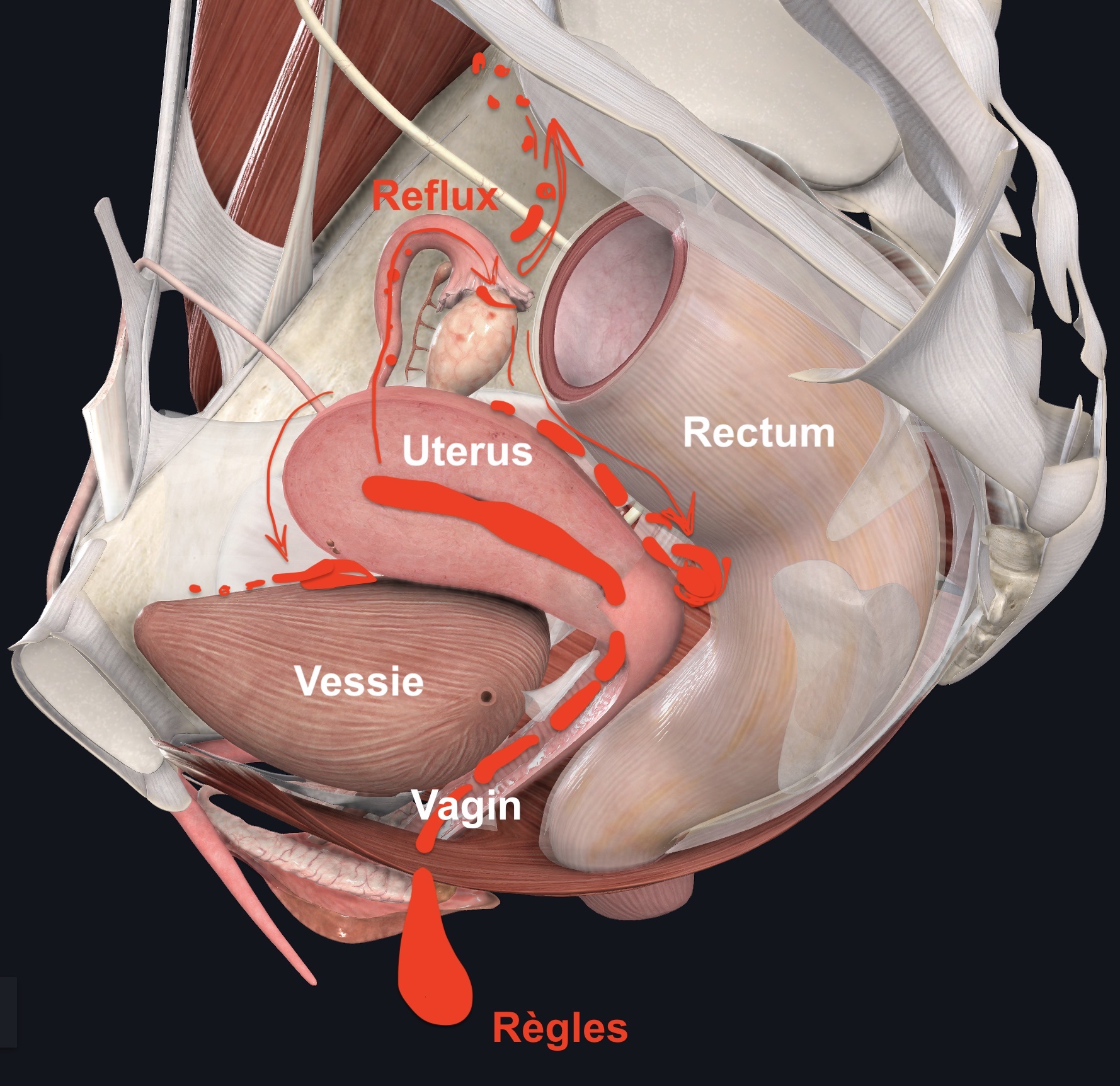 The consequences of endometriosis lesions

The growth of endometriosis lesions leads to the appearance of increasingly voluminous lesions, which may invade and infiltrate organs of the pelvis or abdomen i.e. the ovaries, tubes and vagina, but also the colon, rectum, bladder, ureters, diaphragm or more rarely, the sacral or sciatic nerves.

These endometriosis lesions can behave like actual benign tumors that infiltrate and deform the organs and disrupt their normal functioning.

Medical professionals believe that the overall prevalence of endometriosis has been steadily increasing over the past few decades, with no clear explanation for this phenomenon. (Scioscia M, Roman H et al, Hum Reprod 2019)

One of these explanations focuses on the increase in the number of periods in a woman’s life. In recent decades, the increase in the age of first pregnancy, the reduction in the number of pregnancies, and the reduction in the duration of breastfeeding combine to mathematically reduce the duration of physiological amenorrhea in the lives of women. The development of endometriosis, which is directly linked to menstruation, would therefore be more likely to progress.

Other hypotheses put forward the of pollutants and endocrine disruptors in increasing risk of onset and development of endometriosis. Fundamental research studies will undoubtedly one day make it possible to clarify the causes.

Most authors agree that the mechanism of onset and development of endometriosis is probably multifactorial.

What are the types of endometriosis lesions?

What are the symptoms of endometriosis?

How is endometriosis diagnosed?

What are the treatments for endometriosis?

Get help from endometriosis specialists

For multidisciplinary management of endometriosis, IFEM Endo accompanies you throughout your care journey of medical and surgical treatment, medical follow-up and pain management.